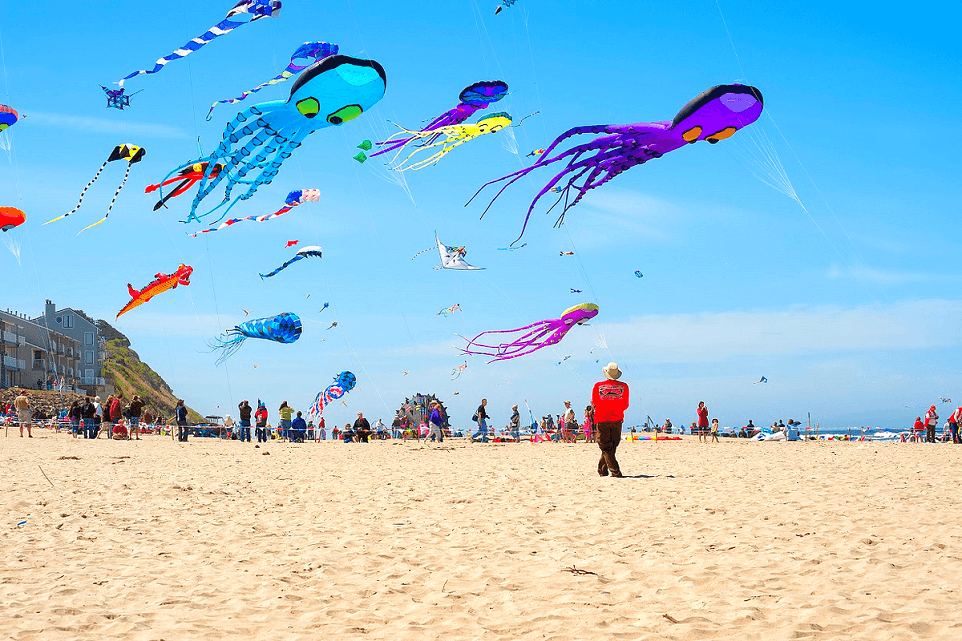 The Bali Kites Festival is a series of kiting events that take place annually between July and August (sometimes through October), notably at the start of the windy season. The kite festivals are one of Bali’s major provincial calendar highlights presenting unique cultural scenes on par with the preceding the Bali Arts Festival. The festival is slated for various dates, with main events customarily taking place along the eastern coast of Padanggalak, just north of Sanur. Main preliminary events are usually held near the end of June and confirmed following favourable weather, therefore planning ahead to witness the event is usually a last-minute deal. Hundreds of competing kite troupes gather from all over the island to pilot their traditional kites, alongside international teams with modern kites in various shapes and sizes.

What started off as a seasonal agrarian festival thanking the heavens for abundant crops and harvests, has become a competitive ground for communal ‘banjar’ youth groups who send their ‘sekaa layangan’ kite teams to participate and win prize money from sponsors. A competition is also usually held for ‘new creation’ kites, which may include detailed three-dimensional figures and unusual designs, from Hindu gods, cars and motorbikes, to mascots and brand sponsors. A gamelan orchestra accompanies each troupe, adding to the joyous spirit of the Bali Kites Festival and the drama of take-off and landing sequences.

The Balinese traditional kites are gigantic and have evolved into increasingly bombastic proportions over the years, measuring up to four metres in width and 10 metres in length. Some other versions, such as the ‘janggan’ type have impressive flowing ribbon tails often reaching 100 metres or more in length. Jointly built at the communal ‘banjar’ village halls all over Bali, skilled youths, supervised by elders, craft bamboo frameworks for weeks up to the major event. Lightweight fabrics are selected according to an agreed-upon colour scheme and some are fitted with intricately carved heads. The final results await transport – usually by truck and requiring special escort along small Balinese roads – towards the Bali Kites Festival flying grounds on Padanggalak Beach.

The ‘bebean’ type is the most common design with a traditional outline of a fish, and is the common ‘giant kite’ of Bali that dominates the skies. The ‘janggan’ somewhat resembles birds with shorter and rounder wings and their long flowing ‘kedeber’ ribbon tails often outshine the kite’s body once airborne. In each competition, the task of assembling and flying the entailing ‘kedeber’ is major challenge for the piloting troupe that normally comprises a dozen or so boys and men. Categories to win include ‘best launch’, ‘best design’ and the ‘longest flight’. Occasionally, the kites descend over nearby rice paddies, and team members must dash through the coast onto the fields to retrieve the hard-earned and painstakingly built kite before it gets soaked.

Although the skies over Padanggalak are dominated by these flying giants during the Bali Kites Festival, you’ll witness kite-filled skies on any given day between June and August - every year. At this windy time of the year, the skies over Bali are just as elaborately decorated as any Balinese procession. Some kites are even fitted with sound instruments in the form vibrating bows called ‘guwang’, which generate a resonating hum that can be heard from far. Enjoy Bali’s windy season sights and sounds!

Don't worry if you missed out on the main opening festival events in July. There are various competitions to witness throughout the second half of the year, which are also highlighted annually as part of the festivity. Following is the tentative line-up of 2017 Bali kite events, as announced earlier in the year by the Bali Kites Association or Pelangi (Persatuan Layang-Layang Indonesia, Bali chapter). Normally, dates may shift following favourable weather conditions.