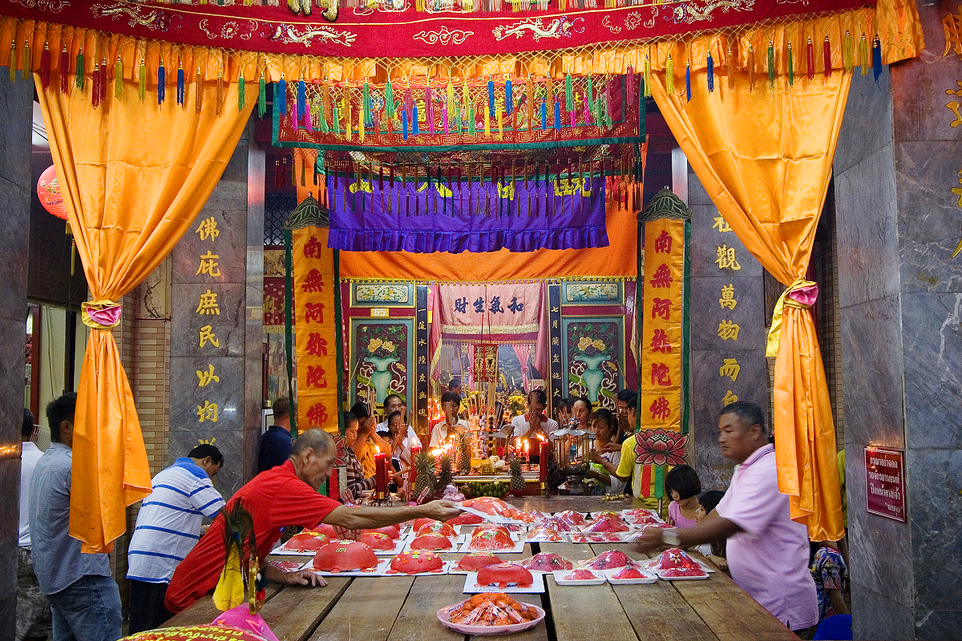 Por Tor or the 'Hungry Ghost' festival is an important merit-making event for the ethnic Chinese. Special food, flowers and candles are offered to ancestors on altars. Other offerings are made to 'feed the ghosts without relatives' that are said to have been released from hell for the month. Experience this beautiful event for yourself at any Chinese Shrine on the island or head to Seng Tek Bel Shrine on Phuket Road and the fresh market on Ranong Road to enjoy two of the biggest Hungry Ghost celebrations in Phuket.

What not to miss at the Hungry Ghost Festival Seng Tek Bel Shrine, (also known as Por Tor Kong Shrine) located next to Bann Bang Neow School, is considered the centre of the festival because it hosts this annual event for seven days and seven nights while most shrines do so for only a couple of days. The Ranong Road fresh market and nearby areas also get busy during the time of the festival. The whole market is colourfully decorated and features interesting activities from about noon until midnight, including a traditional merit-making ceremony, lion dances, magic shows, live concerts, cabaret shows and many more stage shows. Expect to see plenty of local food stands at both venues; it’s a chance to sample Chinese-influenced local food at very friendly prices. There are usually a few big parades going on during the festival (call TAT office for its schedule at +66(0)7 621 2213). School kids and local folks get dressed up in their best traditional costumes; many girls get to wear a red cheongsam (a Chinese-style dress) and to carry flowers, turtle cakes and fruits to the shrines. It’s a lovely sight to see.

The passed-down customs of the Thai-Chinese still show signs of a strong belief in the sense of family obligation and respect for their ancestors. For the main part, the offerings on the altars are red turtle cakes (or ang ku) of various sizes made from flour and sugar. But why red turtle? Simply because, for many Chinese, the turtle represents strength and is a symbol of longevity. Plus, red usually means good luck. Therefore offering a red turtle is not only a good thing for their ancestors, it also means that they are extending their own life too in a sense.

When: The annual festival is held on the first day of the waxing moon in the seventh Chinese calendar month, usually around late August to early September.

Where: All Chinese Shrines in Phuket Island