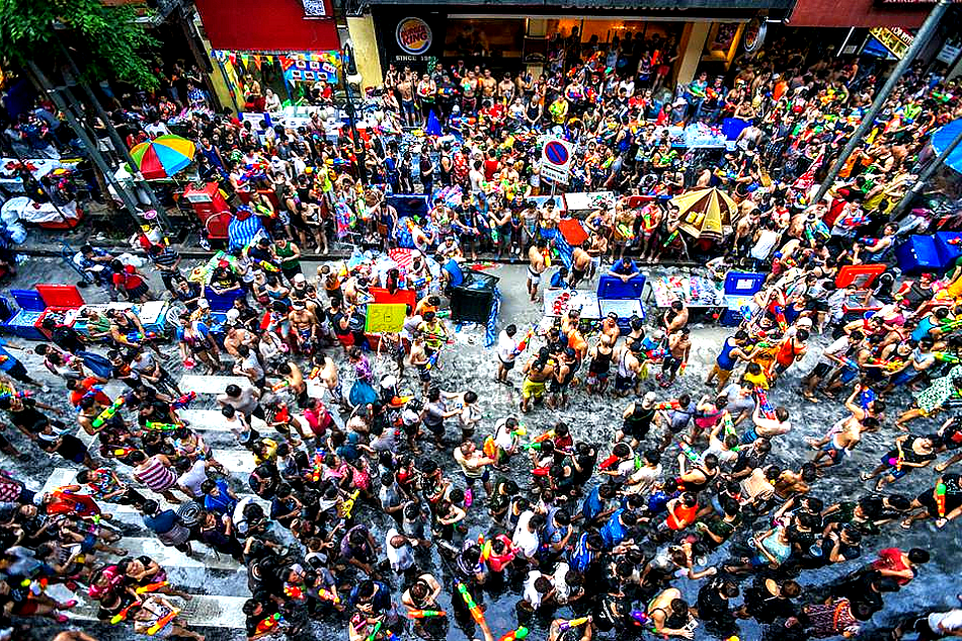 Coming to Phuket during April? Then you’re in for a big surprise if you’re here from April 13 – 15. This is the time of the Thai celebration of New Year, Songkran – an event that marks the beginning of the solar calendar (it translates as ‘the passing of’). For some, it’s a period of reflection and carrying out of familial shows of respect to elders. But for others (in fact for most people) it’s a perfect excuse to get merry, hit the streets and throw tons of water around at anything that moves out there. Traditionally speaking, Songkran tradition was the time of year when the rice harvest was in and farmers had to wait for the rains to begin in order to plant their rice. This would be the driest point of each year so it would seem sort of illogical to waste water by pouring it over elders’ hands but amazingly, gradually over the years Songkran has developed into an orgy of water throwing using buckets and water guns.

Songkran starts off innocuously enough but by midday on April 13 streets are lined with pickup trucks with their beds loaded with ice-cold water and ‘water warriors’ strafing and splashing passersby who line the side of the road shooting back. As you can imagine it’s a fairly chaotic scene, all the more so because the very agents of Law and Order – the police – are the number one targets for many revellers. Nowadays people have taken to adding talcum powder to their watery ammunition; icy water is also an added delight although the police take a dim view of ice cubes. Small children delight in equipping themselves with water guns and spraying anyone who comes in their path – no one is exempt! Remember this date when you are in Patong and leave your cameras and anything likely to suffer water damage behind in your hotel room, because of all the water flying around. This is a nationwide festival but the craziest place to get involved in Phuket is… no prizes for guessing – Patong’s centre of hedonism, Bangla Road with the Beach Road coming in a bedraggled and soaking second as the place to splash and be splashed at. Normally the police will try to keep a cap on things by allowing water throwing only on April 13 but it appears that in Patong anything goes so expect the watery revelry to last longer there.

One thing is absolutely certain: unless you plan to sequester yourself in your room for three days YOU WILL GET WET WET WET! Still, as with all wild parties, certain precautions have to be taken and these are: Only take waterproof photo equipment out with you Do not wear expensive clothing – it will be ruined Best not to ride a motorbike for very many obvious reasons and indeed avoid driving any vehicle Wear sunscreen and apply it regularly as it will wash off If you are in a vehicle don’t expect to get to your destination in a hurry as traffic is snail slow.