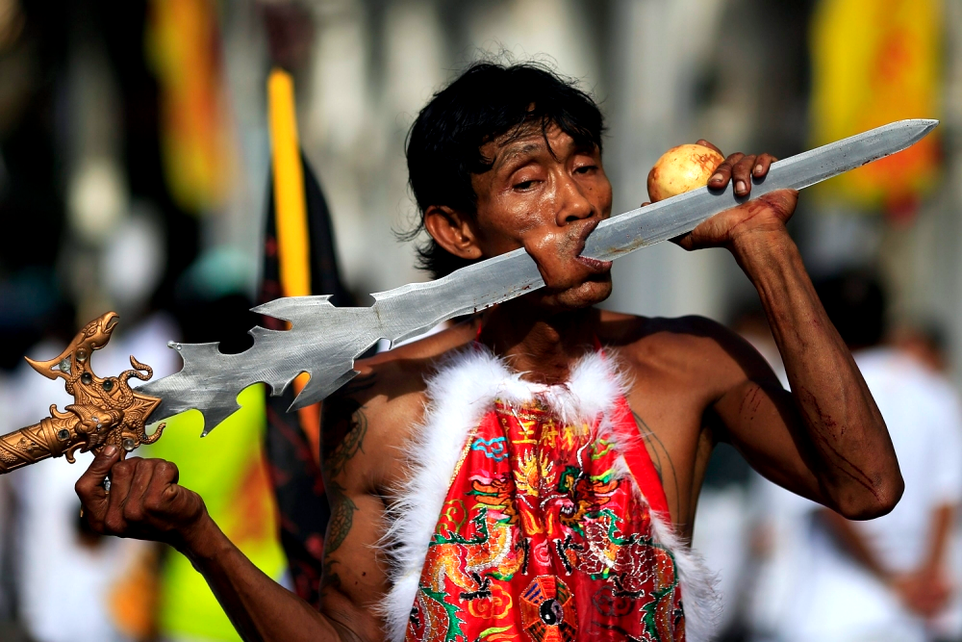 The Phuket Vegetarian Festival is a colorful event held usually late September - early October, celebrating the Chinese community's belief that abstinence from meat and various stimulants during the ninth lunar month of the Chinese calendar will help them obtain good health and peace of mind. Though the origins of the festival are unclear, it is commonly thought that the festival was bought to Phuket by a wandering Chinese opera group who fell ill with malaria while performing on the island. They decided to adhere to a strict vegetarian diet and pray to the Nine Emperor Gods to ensure purification of the mind and body. To everyone's amazement the opera group made a complete recovery. The people celebrated by holding a festival that was meant to honor the gods as well as express the people's happiness at surviving what was, in the 19th century, a fatal illness. Subsequently the festival has grown and developed into a spectacular yearly event that is attended by thousands with participants flying in from China and other Asian destinations.

One of the most exciting aspects of the festival are the various, (and sometimes gruesome) ceremonies which are held to invoke the gods. Fire walking, body piercing and other acts of self-mortification undertaken by participants acting as mediums of the gods, have become more spectacular and daring as each year goes by. Men and women puncture their cheeks with various items including knives, skewers and other household items. It is believed that the Chinese gods will protect such persons from harm, and little blood or scarring results from such mutilation acts. This is definitely not recommended for the faint hearted to witness.

If you would like to attend the Vegetarian Festival and see the exotic spectacle with your own eyes, but have not yet chosen where to stay, we recommend you to consider a selection of private villas in Phuket available for rent for those dates.

Where: Main Chinese Shrines on the Island